I have never had a green thumb. The best way plants grow with me is when I generally leave them alone. This is usually the case, since I am terrible at remembering to water them. So, unless they can grow on a low budget, with whatever earth I have in a pot or find around or dig up, and whatever water I remember to give them, and whatever sunlight they can get from wherever they happen to grow, then plants had better leave me alone.

It’s a completely different story, of course, when I receive a plant.

Someone gave me a fortune plant a couple about three years ago. As far as I know, they are a hardy bunch and not very easy to kill. Somehow, mine died. Don’t get me wrong. I didn’t deliberately abandon it. It just sort of shrivelled away and died after several months. I think it didn’t like getting moved about too much, which is what happened when I had to move to a new place. But I think I either over-watered it or forgot to water it. I forget which.

On my birthday, someone gave me a tiny little rose bush in a wee pot. It have five pretty rose blossoms (okay, four and a bud) on it and was the prettiest thing ever. I know I was happy to get it, but at the same time, I was somewhat dismayed because I was so worried it would just die on me, like most of my other plants. Especially the ones I tried to take care of. 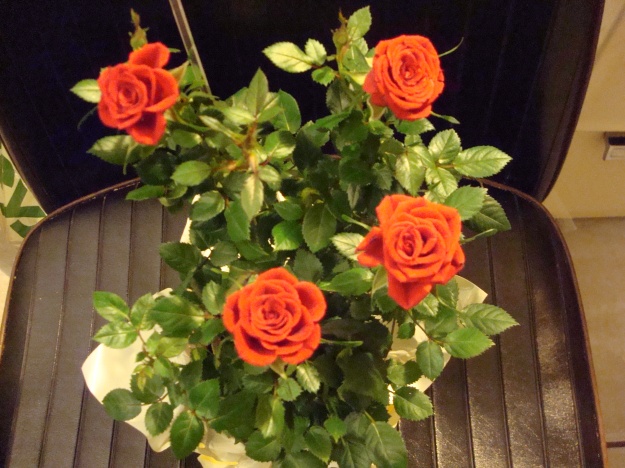 My birthday roses from Angela J.

Naturally, I couldn’t just abandon this pretty little plant that had been entrusted to my care. And so I began taking care of it. At first, I just kept on watering it. The leaves turned a bit yellow-green, instead of the nice rich green they were. I remembered something about over-watering and leaves turning yellow. I also realized it might be a good thing to take the wrapping paper (which was really plastic) away. Of course, the paper was full of water. With paper gone, the little plant improved a bit. I figured about an ounce or two of water a day would do. About three or four days after, the water just drained straight into the saucer I had put the pot on. Too much water. I cut watering down to every other day.

Then the bugs came. Tiny little creatures that deposited a white fuzz and little green and black spots on the backs of the leaves. A quick trip to my Practical Problem Solver book told me they were likely little mealy bugs or some other sort that like rose plants. I also learned I could get rid of them by wiping rubbing alcohol on the leaves with a piece of cotton. That pretty much got rid of most of the bugs. But there were some I either couldn’t find or were really good at evading me, because after a couple of days, there were white web-like threads on the edges of the leaves and more green-black spots on some of the leaves. The leaves were also getting horribly blotchy and dried too.

This time, I tried another remedy: the soapy water trick. I filled an old squirt bottle with soapy water and sprayed the leaves of my plant, as well as the branches and the soil. That finally got rid of all the bugs, but I was left with a plant that looked more dead than alive. My only hope was a few sturdy green leaves. The rest looked like they were doomed, and so they were. I figured that it would be such a shame to let this pretty gift plant die, and so began battle to save my rosebush.

My little rosebush has the best window seat on the floor beside my balcony windows, where it can get sunlight from when the sun rises to when it sets, almost. When there is sunlight, that is. So I open my blinds every morning to let whatever sunlight there is come in for my little rose bush. It got a full trim, all the dried leaves taken off when they were completely dried. A weekly soapy bath for a couple of weeks, then a regular soapy spray of the soil, which is covered with the dried leaves and prunings for mulch, have kept the pesky bugs away.

It wasn’t long before tiny new leaves started sprouting everywhere. The old leaves went a few at a time. Finally a bud showed, and when it was near opening, another bud showed! The first rose didn’t have several layers of petals like the original flowers that came with the rosebush, but it was a rose! And now, as its petals are curling backwards and getting ready to drop, the new bud is starting to open. Moreso, it does look like it has the same lush layers the original flowers had.

I’d been wanting to start an herb and flower balcony garden but didn’t trust myself around plants enough….now, I’m actually excited about the possibility of maintaining a blooming balcony garden!