What do you get when you serve nine different kinds of soup and a variety of visual art pieces at The Mack? You get Soup’Art!

No, it’s not a joke. The Societe Saint-Thomas-D’Aquin and Confederation Centre of the Arts were completely serious when they sent out invitations to a novel art exhibit where, instead of picking at trays of traditional cocktail fare, viewers were presented with nine varieties of soup, from the traditional vegetable soup to the exotic Kenyan soup and the innovative sweet potato and coconut milk soup. It was an adventure and in itself, with the soup ladled into coffee cups that were just the right size to get a good taste of the soup without being filled so that you had no room to try the other varieties. It was soup sampling extraordinaire created by innovative and skilled soup artists.

That was not the only part of this twin-event. Along with the soup buffet was an exhibit of works by francophone artists. On display were works by Norah Pendergast, Faysal Boukari, Noella Richard, and Alma MacDougall, including paintings, photographs, graphic art, and animation. Also part of the exhibit was a traditional animal-hide shirt by self-taught Mi’kmaq artist Alma MacDougall, whose vibrant photographs of Mi’kmaq dancing in their brilliantly coloured ceremonial costumes were captivating. She photographed dancers’ heads so that they resembled colourful birds with extravagant plumage. Similarly, she captured costumed dancers in motion so that they resembled birds in some sort of ritual dance, flaunting their feathers as they twirled around.

Throughout the whole event, short films created by Faysal Boukari with students from L’École François-Buote under the ArtSmarts Program were projected onstage. Faysal is a Parisian graphic and animation artist who has chosen to stay in PEI. He brings with him a unique and contemporary style with a certain whimsy that contributes to the mélange of artistic styles in PEI. When not working with film, Faysal’s preferred medium seems to be pen and ink.

Norah Pendergast displayed a few works that reflected island life. A French teacher in rural PEI, she is also a writer. Her paintings are reminiscent of illustrations for storybooks, likely a reflection of her background as a school teacher. Her use of primary colours in focal images in her painting draw the eye to them immediately. Her human figures are disproportionate, with the legs elongated and the heads and torsos much smaller in relation to the legs, a lengthening of proportions that is similar to Modigliani’s methods.

Noella Richard’s portrait of a man called the most attention to it, with the man’s face spilling out of the canvas, pursing his lips over likely toothless gums. Unlike her smooth portraiture were paintings of a squeeze-box and a keyboard that were done in similar style with strong red tones, rough textures, and the paint applied with a palette knife.

The variety in the artists’ styles was a great complement to the variety of soups and viewers left sated, both aesthetically and gastronomically. 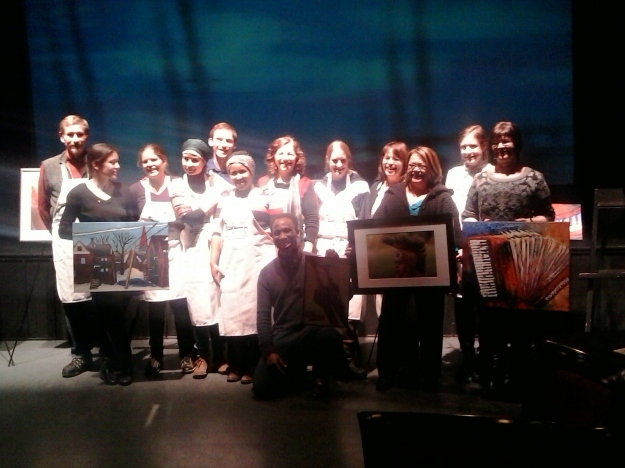