The Lorax by Dr. Seuss: A Review 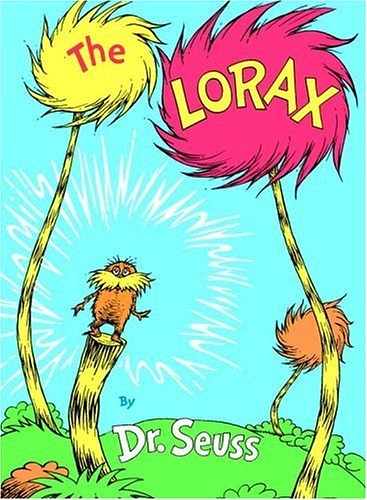 What happens when greed drives businesses with no concern for the environment? Theodor Seuss Geisel, better known as Dr. Seuss, has once again dealt with a sensitive and important topic in an immensely imaginative story. He is well known for stories like How the Grinch Stole Christmas and The Cat in the Hat, among others; and like his other books, this one must be read not just because it is enjoyable, but because it delivers a powerful message we need to learn while we are still very young.

Originally published in 1971 by Random House Children’s Books, Dr. Seuss’s The Lorax was a proverbial warning to care for the environment at the risk of destroying nature. It also suggests that businesses need to assume corporate responsibility for the environment by not exploiting natural resources without replacing them.

The story begins with a young boy seeking the Once-ler on a dank midnight in August in a place that is dismal with polluted air and a wind that “smells slow-and-sour when it blows.” According to legend, the Once-ler is the only one who knows about the Lorax and how it was lifted away one day.

The Once-ler was a newcomer to the place, which used to be a paradise full of green grass and Truffula Trees that bore fruits on which Brown Bar-ba-loots fed. Swomee-Swans flew about singing beautiful songs among clean clouds and Humming-Fish filled the pond.

Discovering how soft, silky, and sweet-smelling the Truffula Tree tufts were, the Once-ler decided to build a small shop to knit Thneeds from the soft tuft. As soon as he finished knitting the Thneed, the Lorax, an unusual-looking creature, appeared, demanding to know what the Once-ler had created and what he intended to do with it. Explaining that he would sell it, the Once-ler immediately sold the Thneed to a passer-by. The Once-ler was happy to sell his ridiculous product so easily and proceeded to invite all his relatives to work for him. He created a large factory to produce more Thneeds. When he wasn’t harvesting quickly enough to satisfy the production, he invented a machine to chop down trees four times as fast.

As the trees disappeared, the Bar-ba-loots lost their food source and the Lorax sent them away to find another place where they would have food. The Once-ler ignored him and continued his production because he wanted to become richer from the sale of his product. He increased production and began exporting elsewhere. Meanwhile, the factory spewed more smoke into the air so the Swomee-Swans could not sing. As a result, the Lorax sent the Swomee-Swans on their way to find cleaner air. Besides polluting the air, the factory produced waste from chemicals and dyes that were used to color the Thneeds. This waste was disposed of in the pond and soon, the Humming-Fish had to go. Each time a problem arose, the Lorax appeared to appeal to the Once-ler, speaking for the trees and the animals, which could not speak for themselves. Wanting only to get even richer, the Once-ler continued until, at last, he cut down the last tree. With no more trees or animals to protect, the Lorax lifted himself through a hole in the clouds and disappeared forever.

Left with no more trees to supply his factory, the Once-ler’s relatives abandoned him and his factory shut down. The Once-ler locked himself up in his tower-like home and never went out or spoke with anyone else except the occasional person who was willing to pay a bit to listen to his story.

In the end, the Once-ler expressed his great regret after having so much time to think about his actions, concluding that the world needed someone who really cared for it to survive. He gave the young boy charge of the last Truffula Tree seed with the advice to plant it, take good care of it and propagate more trees so maybe, one day, the Lorax would return with all his friends and make the place beautiful again.

Even if this book was written in 1971, it is still relevant today because it reminds us that we need to take care of nature. The Lorax represents all those who speak for nature and advocate conservation, while the Once-ler represents big businesses that exploit the world’s natural resources with no regard for the future. The story tells us how short-sighted big businesses are when their bottom line is profit and how that can destroy resources, which, after all, are not infinite. The young boy represents everyone else, especially young people, who need to assume responsibility for nature because without our natural resources, we will have no resources at all and an earth that is not fit to live in. It is especially meaningful today because of global warming and the greenhouse effect. We all need to understand how important taking care of the environment is for human survival. After all, without a world, there will be no humans.