Finally took a photo on site! Taken just before Christmas 2014.

Below: Old Folks at Home Mural, with residents from the Garden Home enjoying the scene. 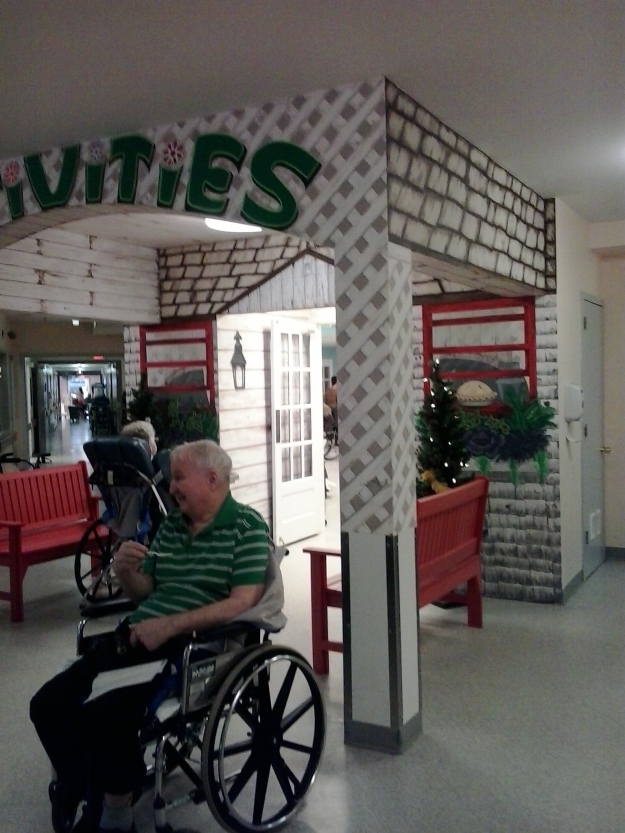 This photo is the Brighton View Landscape in sitio.

Both works of art are on permanent display at the Garden Home on North River Road, Charlottetown, PE.

Here, in different stages, is the Brighton View Landscape painting I created for the Garden Home.

I made this rough sketch at the park before starting out. I was standing at the farther end of the enclosure of the Fort, so the view is more frontal than aerial, but when I did the painting, I shifted it so that the view would be more aerial. 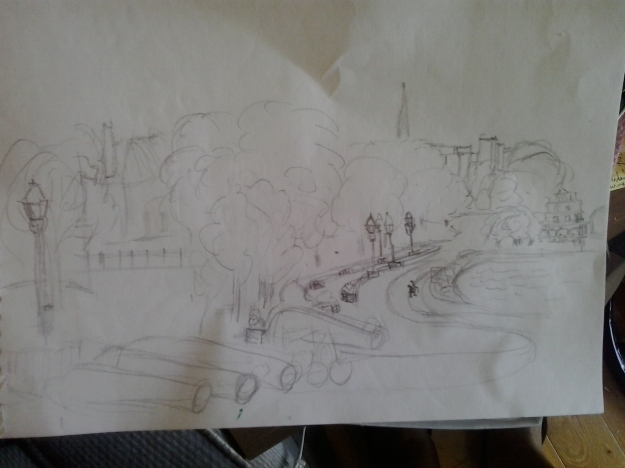 When I started out, I figured I’d make the cannons a central image, and based it on a photo I had taken with the cannons close up and forward.

I should have gone with the preliminary sketch, which the clients really liked better, so I cleared out the large cannons and pulled out to get more of a bird’s eye view.

The first detail I completed was Beaconsfield House in the upper right hand corner.

which is visible between the trees from the park.

Next, I worked on the rocks around the shore of the Gulf of St. Lawrence, in the Bay that leads to the Charlottetown Harbour, also visible from the park. I added the lamps and detailed them.

Then, I worked on the flower boxes and the planters. Each lamp had flowers at the base. I decided not to include the planters that were used during summer to divide the left lane in two so that there would be a bicycle lane, because it would make the road too crowded and the lanes too narrow. 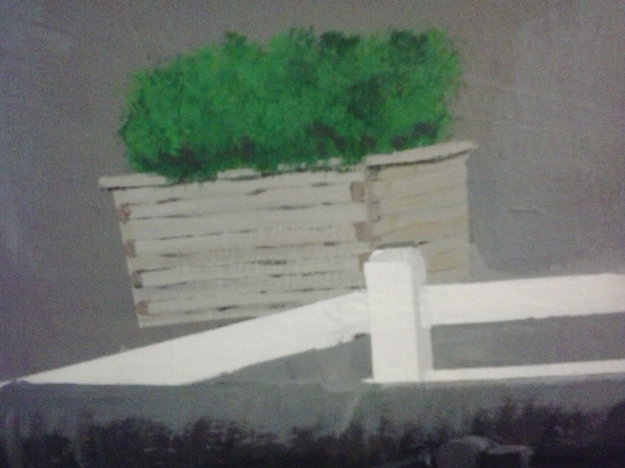 I changed the proportions a bit, so they look longer and thinner up close, but fit nicely in the bottom; I also changed some of the proportions of the fence so I could fit the cannons into the bottom third, so you get more of a view from up looking down. 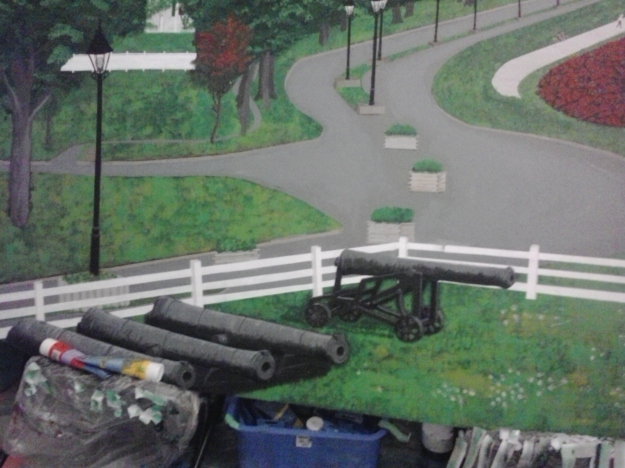 After the cannons, I added more details to the boardwalk–worked on the park benches and a seated woman. Then, when my friends Veronika and her daughter Viola were with me painting as well, I added a jogger so Viola would have her mom in the painting! 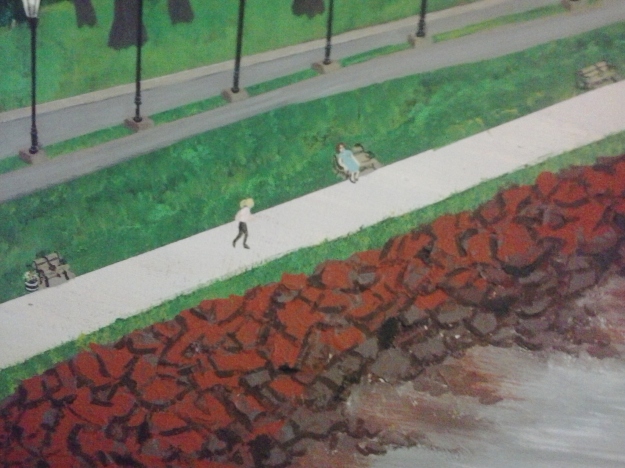 The first time I did the lettering for Victoria Park in flowers, it was too upright, so I re-did that. 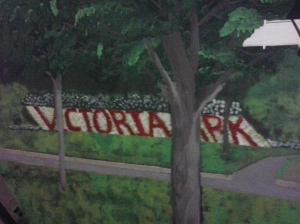 Then, I did the viewing platform, added plants and flowers to the lamp post bases… 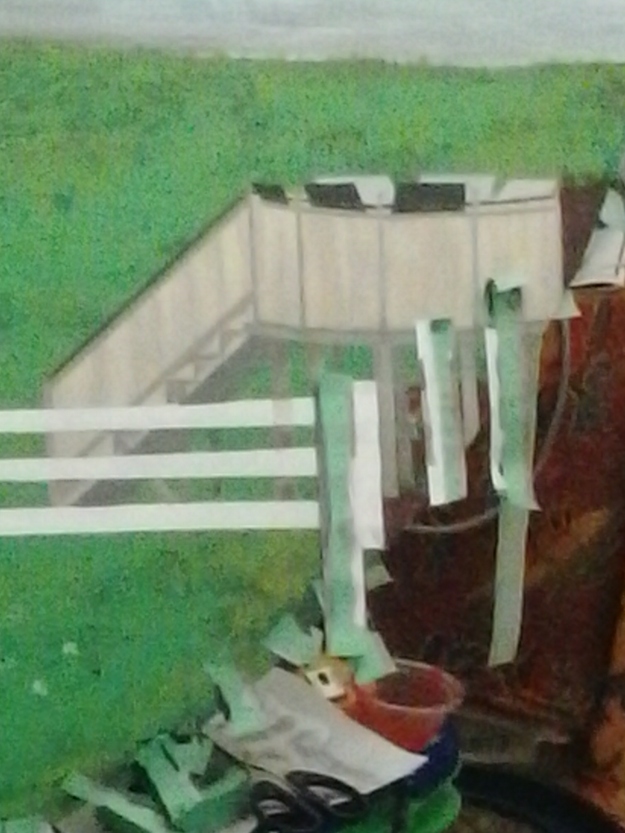 This is the blurry shot of the viewing platform in the making, but clearer than the first one I took… 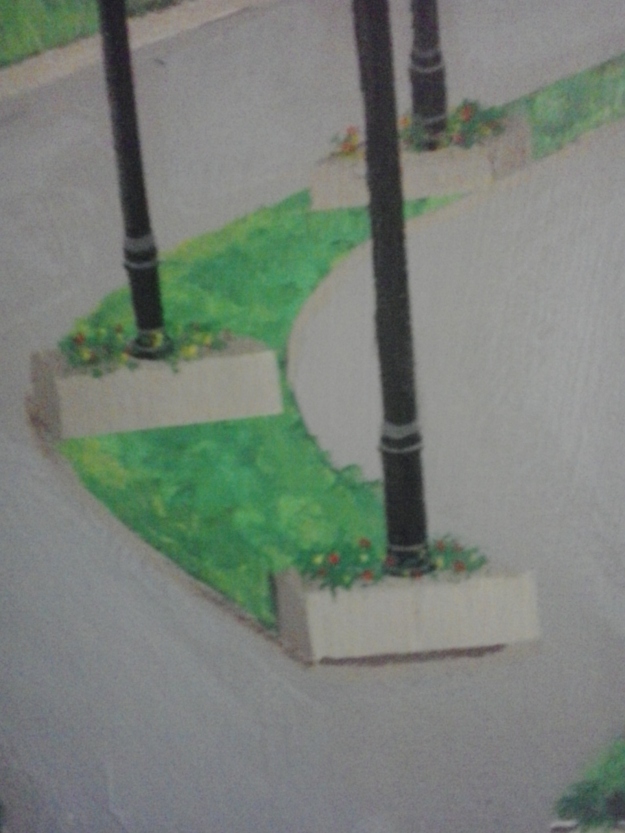 Added plants and flowers to the bases of the lamp posts…

And one day, it was just done. I roughed up the water a little, broke up some of the rocks, then let it sit for a couple of days before spraying a finishing coat.

I let it sit again for a couple of days before I decided how to do the lettering in parchment with gold outlining.

Tried to get a diagonal shot to get the whole painting into my phone view with the biggest possible shot.

The whole painting is too large to take a close-up of, so I had to pull back halfway across the living room to take a full-width view. The actual shape is elliptical… 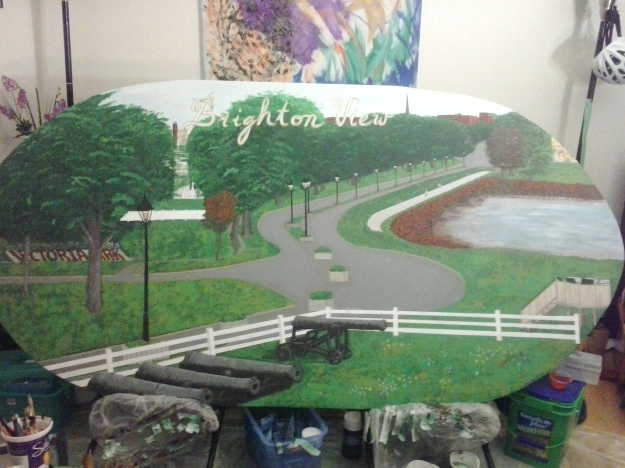 Not enough back-up room. Hehe. It gets cropped on one side.

… and this is what it would look like if it were cropped into a perfect oval shape (which just didn’t happen when Peter was cutting it up with his jigsaw. If the clients want to trim the corners, that’s perfectly all right with me, but I deliberately made a wider ellipse to get as much painting surface as possible.

The Brighton View Landscape can be viewed at the Garden Home, North River Road, Charlottetown, along with my mural of the old farmhouse. I need to take a photo of this with a real camera with proper lighting.

Festive display of greeting cards made by senior participants in the Garden Home’s 2014 L.E.A.P. (Learning Elders Art Program) under the auspices of the PEI Senior Citizens’ Federation through funding from the PEI Department of Tourism and Culture, in cooperation with the PEI Council of the Arts.

The cards were displayed at an Open House Exhibit, where MLA Kathleen Casey handed out Certificates of Completion to the participants. Also in attendance was PEI Senior Citizens’ Federation Director Bill Oulton.

The experience was thoroughly enjoyable for the participants, as well as for myself! I would do participate in the LEAP program over and over again!

(The Garden Home is located on North River Road in Charlottetown) 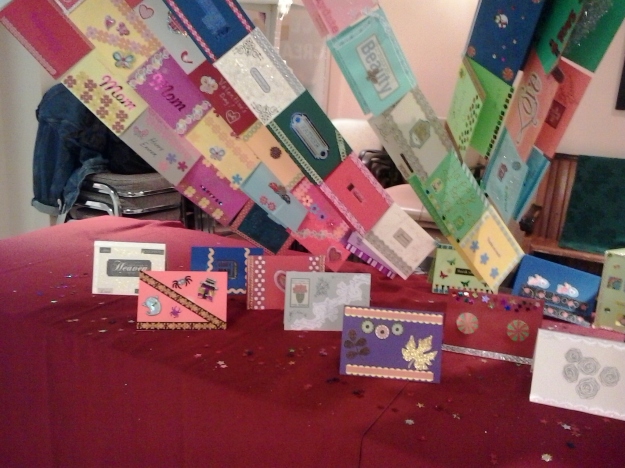 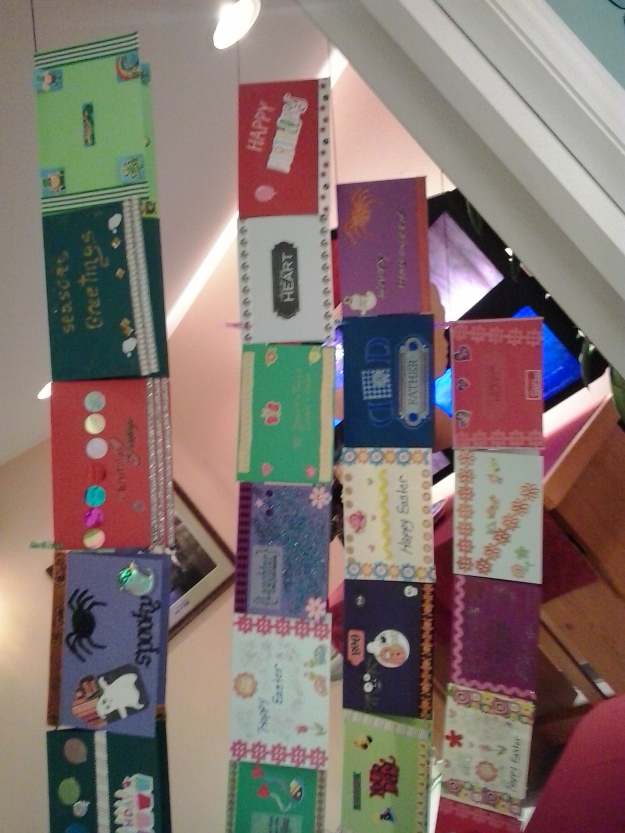 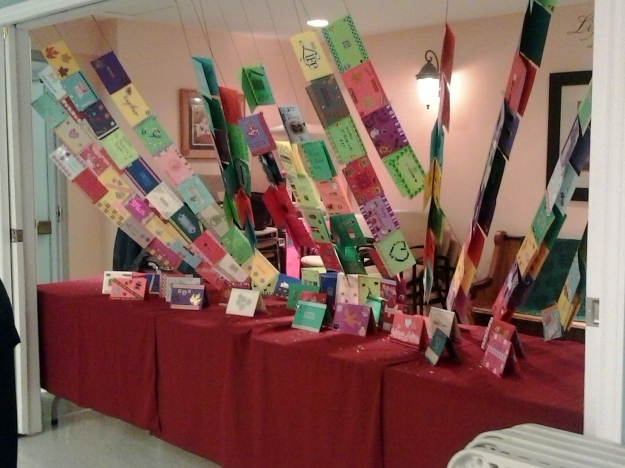 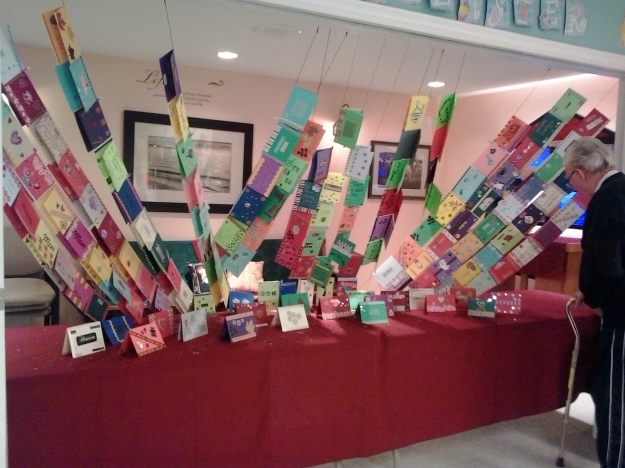 I was really excited to start this project, as were my contacts at the Garden Home, in particular, Angela, who is in charge of special projects. She gave me an idea of what she wanted and I presented her with sketches, designs, lettering, and colour  options. The first day, I put in the dark green colour, which received some objections, as well as the fact that the size of letters was too big, but Angela wanted them big and eye-catching, so I delivered on that. To improve on the letters, I added an emerald green center and created an outline with green yellow to make the letters look more solid as well stand out more. Then, I created the latticework in white, which everyone really liked. (see Day 2). When I started putting in the shadow to make the latticework look solid, Everyone just liked it better! When I started to put in the vines crawling in and out of the latticework, my audience stayed till bedtime.

So far, I’ve been enjoying my days painting this, and am truly glad that it is bringing joy and gladness to the residents and staff as well. Today, I take a break as there is a powerful storm blowing over the island and everyone is staying home. I am hunkered down in front of the TV with my faithful Caliban on my lap, my laundry in the dry cycle, and hot chocolate ready to make.

Next step is finishing touches on the leaves, including shadowing, and a little more shadowing on the latticework.

Nature didn’t take shortcuts to decorate each and every leaf. 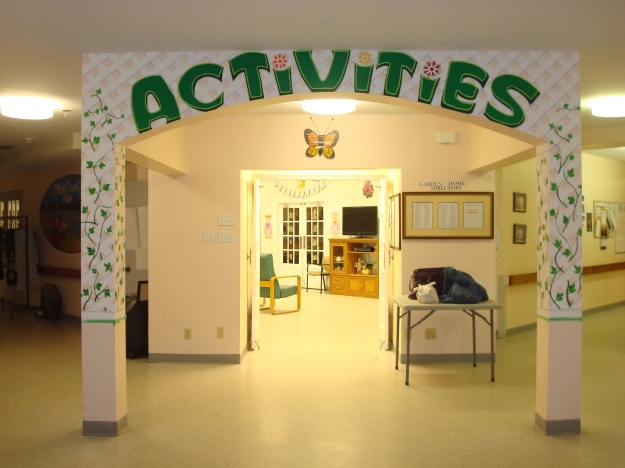 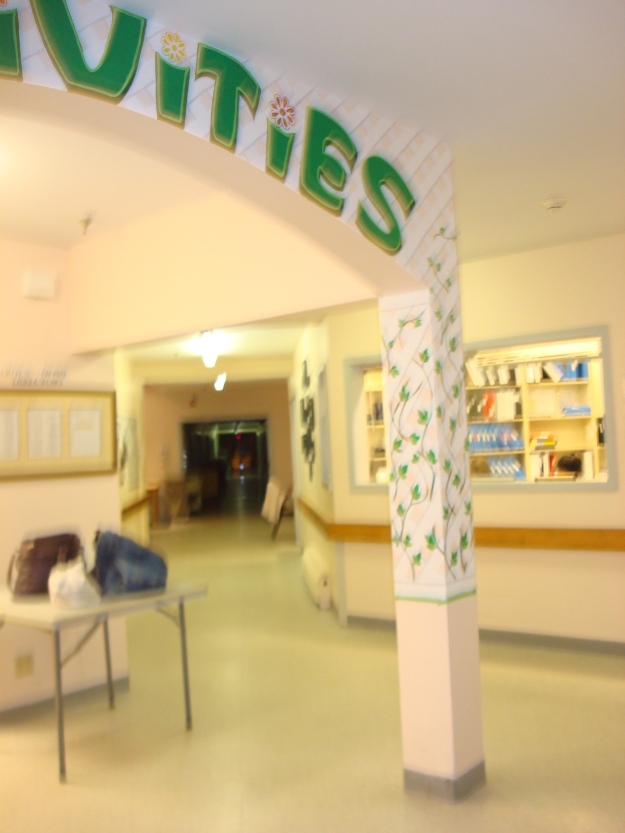 Started a mural painting project for the Garden Home, with outlining for a couple of hours after my last Card-Making workshop with the residents, and close to 6 hours of painting on Saturday. Art is such gratifying work!

Here is what I’ve completed so far: