I came across this article and wondered how rare cold urticaria is, because I also have it. Anyway, here’s the article. I’m grateful I never reached the point when my skin would flare up the way hers does–but then I’ve been careful about exposing myself to extreme cold since I was diagnosed.

I was diagnosed with cold urticaria in 2000 and have been taking medication for it since then. I had just recently returned to teaching after a stint of other jobs. I had been assigned to an air-conditioned classroom, which I thoroughly enjoyed because I do not like the heat.

While teaching one day, my hands started itching. I ignored it. That went on for several days, but the itchiness became worse. I thought it might be that I was allergic to chalk, so I requested that all my classes be relocated to classrooms that had whiteboards instead of chalkboards. Still, the itching persisted. After a few more days, the itchiness intensified, climbing up my arms to my elbows. My feet also started itching and that itchiness climbed up my legs to my thighs. I was so uncomfortable and worried because it was distracting and I tried so hard to hide my scratching. I would tap my legs and arms with pens, my hands, rulers, and almost anything I could use to suppress the itching.

Eventually, I noticed that my hands and legs had started to get mottled with raised red maps. That was when I finally brought it to my doctor, who diagnosed it as cold urticaria and prescribed low-dose allergy medication. With the medication, my itching does not flare up, but if I shower with cold water, my feet start itching; if I wash dishes with cold water, my hands itch; if I walk outside in winter without gloves, my hands eventually start itching; but as long as I don’t forget to take my medication, the itching is limited and controlled. The worst part, of course, is that I love winters and cold weather.

I leave my windows open a crack in winter so that my room (and my whole apartment) stays nice and cool, and in summer, I throw open all my windows and balcony door and keep four electric fans circulating the air and cooling it down.

People ask me if would ever go back to the Philippines and my answer is always an emphatic no. I know I would not survive in the heat–I visited once in January–the coldest month of the year there, averaging 18-20 degrees Celsius (perfect summer temperature here!)–and was walking around in shorts and tank tops or light shirts while everyone around me wore jackets and sweaters while I was dripping sweat. I slept with a window open and a fan facing me directly while my friends spent the night covered with blankets. Was I ever glad to come home to PEI where it was winter!

Cold urticaria be damned, I will have my deliciously cold sheets and cool rooms!

It’s the last week to February and we’ve had some wild winter weather. In 4 weeks, it will be officially Spring; in 2 weeks, we’ll be setting our clocks ahead for DST. We will celebrate the Lunar New Year, better known as the Chinese New Year, ushering in the Year of the Sheep, which starts on the 22nd of February. The Liberal Party is holding its leadership convention and Premier Robert Ghiz is turning over the reins of government to Wade Maclauchlan, former President of UPEI. I wonder how an academic will fare in position as tough as Premier of PEI. There will be many good things, I’m sure, including a clear understanding of the importance of education and culture. I hope that will be enough for him to drag the educational system into the 21st century and perhaps bring along the change that will make PEI’s educational system comparable to the best in the world, similar to Finland. I hope that he will recognize the need to upgrade the system and impress the importance of adequate, if not excellent writing skills. I hope that he will improve the status of teachers and teaching because this profession is in the forefront of ensuring a well-trained, critical-thinking workforce that will become the backbone of PEI’s economy. I hope he will unite all PEI communities in building up the province, and equalize so many things that are blatantly unequal. I hope a lot of things for PEI’s new leadership, but I also hope that islanders pull together to make this tiny island province a much better place to live in.

I have seen few large wild birds in their natural habitat and my encounter with a snowy owl was an exception. It was late at night one winter when I was sitting in a car with a friend, chatting and enjoying the view of the frozen river and the white snow around us when a snowy owl landed, seemingly out of nowhere, on the boardwalk a few feet away from the car. It sat on snow, eying its surroundings, its magnificent head turning, its bright yellow eyes blinking occasionally.

For several minutes, it just sat in the cold snow, its wings not tucked in but trailing on the snow. When it finally moved, it was in a waddling walk, one wing tracing a shallow trail in the snow beside it. Clearly, the bird was not made for walking. After walking a bit, it flapped its wings and rose a few meters in air no higher than the top of a lamppost that cast its white glow into the cold air, then settled back on the ground as if exhausted and lost after a long journey from some snowy mountainous region in the Maritimes. Perhaps it had come across the Gulf of St. Lawrence, buffered by the recent snowfall and biting winds.

The owl was a splendid creature with its brown-and-black-tipped white feathers that made it look like it had silvery tufts tucked into its plumage. We assumed it might have hurt its wing and had sought respite on our island, finding shelter under the Hillsboro bridge. Before long, another owl, almost a pure white, landed a few feet farther than the first, but that one did not stay, launching over the frozen inlet and disappearing under the bridge before long. We surmised that the birds were mates and were seeking refuge because one of them had been hurt.

My companion, ever concerned, ever helpful, stepped out to see how badly hurt the bird on the ground might be, approaching it warily. He was concerned the bird might be attacked by a fox that had, only a short time earlier, prowled along the river’s edge on some nocturnal mission. I warned him to take care because owls, after all, are wild birds and predators, their small hooked beaks sharp, their long and threatening talons camouflaged under feathered feet. My friend stopped a little more than an arm’s length from the owl, thinking its wing broken, and for a split second, man and bird stood under the same circle of light, creating a frosty mist in the crisp night air. One second then the bird gathered its wings and lifted them, drawing ever so slightly closer to the man, hovering for but a moment, before it pulled away and lifted into the air, flying after its pair to find shelter under the bridge. Did the bird think it was being threatened? Would it have attacked the man? Perhaps the trailing wing was merely a ploy to attract prey. It could have spotted the fox and planned on abducting it, but encountering a creature larger than it could possibly lift across the icy inlet, it changed its mind and decided to retreat instead. We guessed it must have been that because it spread its majestic wings, longer across than my friend was tall–and he is not a small man–and swooped away, gliding like a white kite in the night without the slightest hint of an injury. It disappeared under the bridge, invisible in the shadows.

It was on the news, the next day, that a pair of snowy owls had taken up residence under the Hillsboro bridge, and after a few more days of being in the forefront of unusual events of interest only to the locals that long winter, the birds were found to have abandoned their temporary shelter. It was my first encounter with a bird that has long enthralled me because of its beauty and wildness and its symbolism as the wisest of creatures. It was more magnificent than any photograph could ever depict and, in making its choice to leave us, undoubtedly wise in choosing the wintry wilderness where it was born and, without human interference, will hopefully live out its life.

The wind was so strong it pushed the snow through the screen on my balcony and covered the glass doors! The snow is knee-deep on my balcony by the doors, where the wind blew it and it caught with no where else to go. Down in the parking lot, the vehicles sit in cozy little wells except for the truck on the end, where the wind has blown the snow up on its side and over the roof of its cab. It’s actually nice and bright outside but the wind still howls and the trees sway here and there, swirling, twirling, confused in the wild north-easter. 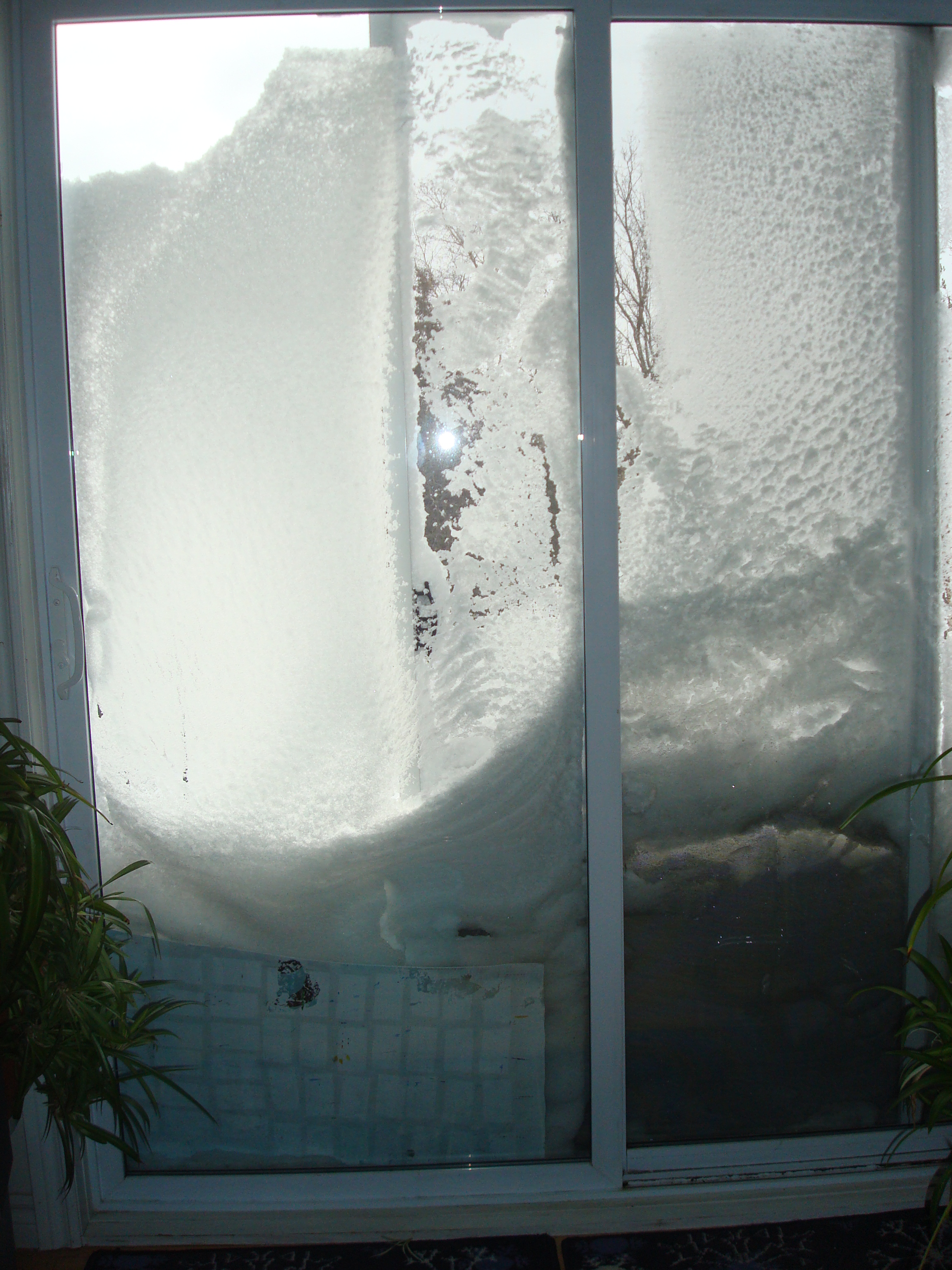 there’s a tug-o’-war for spring
summer in no hurry to come
lazing somewhere in the tropics
winter struggling hard to stay
throwing temper tantrums when told to go away.

can’t see the fine rain
but the tree branches are getting whiter
by the minute collecting ice
on every twig and bough
it’s not so much a snow day
as it is an ice day
with the frosty breath
of winter freezing the spittle of march
on everything it touches.

arms reach out in silent plea

weighed down with wet snow.

arms reach out in silent plea

weighed down with wet snow.

a hint of spring

a touch of summer

a shade of autumn

a breath of winter